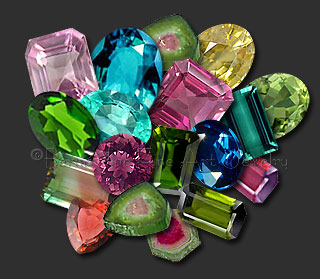 The name Tourmaline comes from the Sinhalese (Sri Lanka) word tura mali which translates as the stone of mixed colors. These stones are 7 to 7.5 on the Mohs’ scale of hardness.

Bi-colored and multicolored tourmaline may be green at one end and pink at the other, watermelon tourmaline is green on the outside and pink on the inside. Some stones are dichroic meaning they appear to change color when viewed from different angles.

The most expensive tourmalines are the blue indicolite, green verdelite and pink rubellite.

Cat’s Eye Tourmaline exhibits a “cat;s eye” effect similar to what is commonly seen in tiger’s eye cabochons. Chrome Tourmaline is colored by chromium resulting in a beautiful green stone that is often confused with emerald or the tsavorite garnet. Indicolite is a dark blueish black stone. The Paraiba tourmaline is a bright neon-blue and Rubellite is a deep reddish purple stone. Schorl is the name given to black tourmalines which are the most commonly found tourmalines.

Ancient legend says that tourmaline is found in all colors because it traveled along a rainbow and gathered all the the rainbow’s colors.

Tourmaline is believed to strengthen the body and spirit, especially the nervous system, blood, and lymphs. It is also thought to inspire creativity and was used extensively as a tailsman by artists and writers.